Across the Divide 5/11/18: Who is driving the population growth? 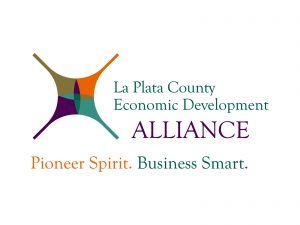 New ideas from around the world that could impact your business here in La Plata County!
Brought to you by your La Plata County Economic Development Alliance

In the April 6th Across the Divide, we talked about Census data showing that mid-sized cities and suburbs were making a comeback.

It’s not just anyone that is driving that population growth though.  Anecdotal and increasingly statistical data is suggesting millennials are powering this trend:

Author Patrick Sisson finds that millennials can “boomerang” to midsized cities under the right conditions.  First, it is typically millennials who are “settling down” and either getting married or considering starting families.  Second, the economics also have to work: generally, the communities need to be cheaper than the big cities; as well as afford good home ownership opportunities.  Finally, there should also be better career opportunities available.  The article also finds that an increasing number of tech jobs are locating to smaller cities.  Other writers, such as Joel Kotkin at City Journal, have documented that there has been strong growth in professional service jobs within small cities which could also be creating opportunities.

Are millennials moving to La Plata County?  Over the last 16 years, the 25-39 year old population has been growing, at best, at the same pace as the county overall.  Usually it’s slower though.  But in the City of Durango, the story is startlingly different: 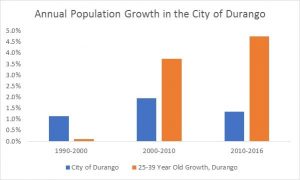 In the 1990s, barely anyone between 25 and 39 years old moved to Durango. However, in the 2000’s growth in the 25 to 39 year old age group was almost two times faster than the city as a whole.  So far this decade, growth in older millennials is three times as fast as the city overall.

Durango is not only offering more professional opportunities, but remote working is allowing talented young individuals to work from anywhere.  It is getting harder to find couples in and around Durango where at least one of them isn’t working remotely.  If we lack local opportunities, high speed internet is allowing many young professionals to fill the gap.

So, it seems like Durango at least is seeing the millennial boomlet that other small cities are experiencing.  Will other areas in La Plata County benefit?  Only time will tell!