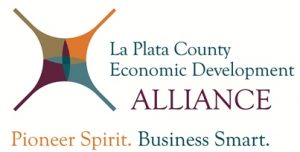 New ideas from around the world that could impact your business here in La Plata County!

Brought to you by your La Plata County Economic Development Alliance

What would happen to your business if everyone living in Durango moved away?

The Herald reported that Katzin Music is closing its doors in Durango after 40 years of business:

Katzin got a portion of its business from New Mexico and Arizona.  And while the internet played a role in the fabled store’s closing, the economy in New Mexico probably contributed as well.

The Alliance has spent quite a bit of time over the years looking at the drivers of sales tax growth in Durango and La Plata County.  After some fruitful conversations with John Baxter, a former President of Nabisco foods, we were able to statistically identify three things that drive most of the sales tax in the City and the County: the population, the unemployment rate, and the number of tourists.

The only problem was, the model was overestimating the amount of sales tax that Durango and La Plata County should have received in 2015 and 2016.  What it turns out we were missing was Farmington and San Juan County, New Mexico.

Since 2010, the economy in San Juan County has been hammered by low natural gas prices.  Jobs have evaporated, and with those lost jobs people have left.  In fact, the County has lost close to 16,000 residents, roughly the same population as Durango, and has the unfortunate distinction of being the fastest shrinking city in the United States.

When we incorporated this population decline into the model, we solved the sales tax overestimate.  In fact, the regional population, the County unemployment rate, and the number of tourists explains 91% of the sales tax change in the City of Durango.

What would have happened if the San Juan County economy had just been flat?  The chart below shows what sales taxes would have looked like in Durango if the economy to our south hadn’t turned south: 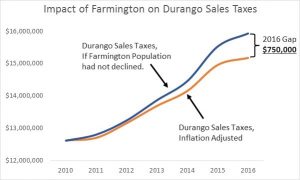 Sales taxes would have been at least $750,000 higher in Durango in 2016 if San Juan County, New Mexico had simply maintained its 2010 population.  That’s $25 million in sales for our local businesses.  For La Plata County, there would have been at least an additional $1 million in sales taxes as Farmington residents make purchases in other areas of the County too- like Purgatory and Vallecito.

So what does Farmington’s economy mean for Durango and La Plata County?  On the sales front, it means close to $2 million in sales taxes each year.  It might also mean the difference between venerable businesses like Katzin keeping their doors open, and closing.